There are three elements that make good quality Kuromaguro.

They are decidedly, color, fragrance and texture. 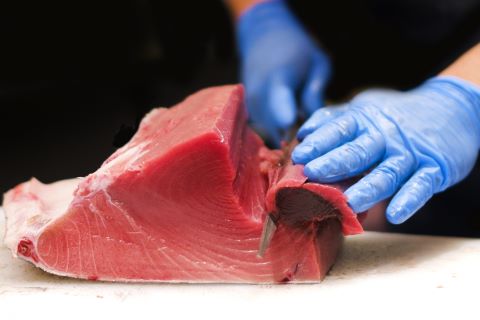 First of all, color does not simply refer to the color of the cross-section when the fish is cut with a butcher knife.

It refers to how long the fish maintains its “characteristic coloring”. After all, tuna darkens as time passes, eventually turning a burnt-brown color. The true, visual charm of Kuromaguro is the eye-awakening red color that catches your attention when the sushi is placed on a counter or plate. This wonderful coloring is a characteristic of tuna caught through longline fishing or single‐hook fishing. On the other hand, it is said that those caught in round haul nets don’t hold their color and don’t last long. When frozen tuna is thawed, it turns brown within a day. This focus on color is based more on Japanese restaurants that serve sashimi at tables that are located farther away from where the food is being prepared, than on sushi. Incidentally, Mebachi, despite also being tuna, holds its color longer than Kuromaguro does and is suitable for take-out sushi. Minamimaguro is a darker red color than Kuromaguro, but it also loses its color quicker. Kihada maintains its color best.

Next, where does Kuromaguro’s appealing fragrance come from?

The truth is that the source of fish flavor components is still being researched and there are a lot of unknowns. What we do know is that this fragrance is made up of many volatile compounds, but since there are only trace amounts of each one, they are difficult to analyze.

Yet, in the case of expensive Kuromaguro, every measure possible is taken to make sure this fragrance is maintained. Kuromaguro is a migratory fish that gets around by swimming at high speeds in the surface layer of the sea. It needs strong muscles to swim this fast. it also needs to circulate blood throughout its entire body in order to vigorously move those muscles. When a tuna violently struggles to resist and twists its body to avoid being caught, the proteins in its muscles (myosin and myoglobin) rapidly react with oxygen and start to degenerate. This causes Yake and the oxidized odor of tuna. It is important to catch the tuna while causing it as little stress as possible, quickly remove the organs and then use ice to rapidly cool the entire body. If this process is delayed then the pleasant fragrance will transform into an odor. In other words, the scent of Kuromaguro all depends on how it is processed after being caught.

The meat of Kuromaguro that is properly processed emits a unique aroma with a slightly acidic taste when you put it in your mouth. That fragrance lingers for a long time and it combines beautifully with the acetic acid of the sushi rice to go straight to your nose. Then, the moment the fish has disappeared down your throat, the scent of the iron and a subtle acidic taste linger very nicely. This experience is only possible with the exceptional Kuromaguro.

As for the texture, this is determined by the fat distribution of the tuna.

Especially in winter, the Harakami cross-section of Kuromaguro is marbled, much like the Ribulose of Wagyu beef. The melting point for the fat of high-quality tuna is low, and it starts to dissolve even at human skin temperature. This is why sushi chefs who are particular about the sense of unity between shari (sushi rice) and tuna, say, “Shari should be skin temperature.”

There are many chefs who say that the umami of Kuromaguro is in the fat. In the first place, Kuromaguro is one of the fattier fish, and especially between autumn and winter, the Kuromaguro that fed on Surumeika and Sanma has exceptional Harakami. The organs of both Surumeika and Sanma are rich, full-bodied and delicious, even when grilled and eaten by humans. In other words, it is the Surumeika and Sanma that the tuna feeds on that determines the quality of meat. As an example of the meat quality of tuna being affected by what that tuna fed on, Kuromaguro in the Atlantic ocean that has fed on Nishin may exhibit the scent of Nishin when made into sashimi.

However, having a high fat content is not the most important factor. For example, farmed Kuromaguro is fed a high-protein diet so that it will be fatty regardless of the season. Yet, the fat is tougher than that of the wild fish and it’s not something that leaves you wanting a lot more. In comparison, the fat of wild Kuromaguro has a fine texture throughout, immediately melts in your mouth and is digested easily. As sushi chefs know, the fresh fish seems to suction to their hands when making the nigiri sushi. In the same way, it has a smoothness that seems to suction to your tongue when you put it in your mouth. Once you’ve swallowed, it leaves you craving more.

This is the depth of wild Kuromaguro.

We hope this information will be helpful.