At Pierate, we like a good challenge for British Pie Week. From spending three and a half days eating only pies to making unique creations, we have done some quite unusual things. For British Pie Week 2019 we headed to Sheffield, we had been given some recommendations for pies to try in the city and it seemed like a good excuse for a weekend away. In particular The Broadfield pub came highly recommended. Upon investigating what pies The Broadfield had on offer we found out that they were running a Pie Week Challenge where you had to eat a pie in 3 of the pubs run by the True North Brewing Company in order to get a voucher. The concept of the Pie Week Challenge was appealing but we decided if we were going to do it we needed to up the ante. Given that we were only in Sheffield for one night, we would try and complete the challenge in just one evening! Contacting True North, they were keen on the idea and kind enough to offer pie at one of the pubs for free if we were to complete the challenge. That made it even more appealing. Given that there was a bit of distance between the pubs, we had to allow ourselves enough time to eat the pies and get between them, our itinerary (or pie-tinerary) was as follows;

First up The Broadfield was a relatively easy walk down Abbeydale Road from where we were staying. It was a traditional drinking pub but done up in a tidy manner. They were clearly doing something right because it was very busy on this Saturday Night with drinkers and diners. We were ushered to our table in the fashionable semi-gloom that illuminated the dining area. The menu didn’t have an overly extensive pie choice with only two meat pies available. There were both vegetarian and vegan pies available which we have nothing against but we would rather let the British Pie Awards deal with those and we can stick to the meat pies. 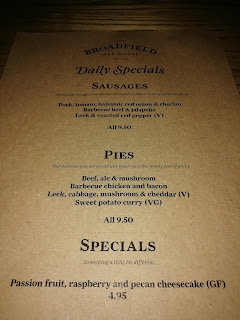 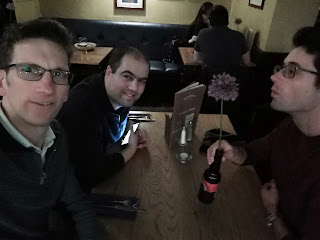 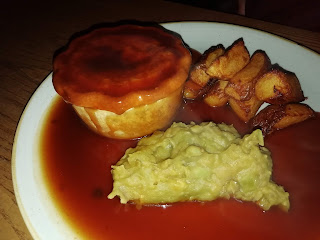 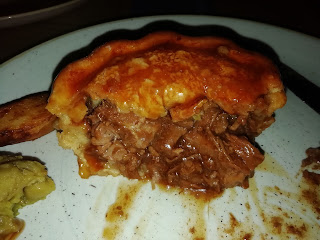 Condition – 6.25/7 – Tall and well formed, this had a classic look with a nice crimped edge and pastry animal shape on top. Arrived with chips & peas well presented together. Unfortunately it was covered in gravy which made the appearance harder to assess.
Color – 6.50/7 – A dark brown, and excellent color hinting at tasty pastry.
Cheapness – 5.40/7 – There was a really good amount of meat in the pie but the pea and mash portions seemed unnecessarily stingy, although only the pie was rated this did affect the value.
Capacity – 6.80/7 – This pie achived near perfect capacity. It was tall, quite big and hardly any air gap.
Chewiness – 7.00/7 – All the Pierateers agreed that the texture of this pie was perfect, from the melt in the mouth meat to the crunchy on the outside and gooey in the middle pastry. We felt it had to be given maximum marks. Pierateer SJL tried to argue that full marks are not possible. The others then found histoiric reviews where SJL had given a number of 7s for one pie so he had to concede!
Content – 6.00/7 – The meat and gravy were delicious and brilliantly captured the quintessential Beef & Ale pie flavour. It was noted that there didn’t seem to be any mushroom at all and overall the flavours, whilst brilliant, didn’t really have anything to give it an edge.
Consistency – 6.50/7 – The filling was moist enough with a thick sauce, the additional gravy wasn’t really needed. The pastry and filling worked well together, the pie was consistently of a very high standard.

We had to eat quickly and be on our way. The Wagon & Horses was on the same road so we opted for a walk, but it was a rather long way down the road at 1.3 miles so we had to walk quickly. Whilst it was good to start burning off some of the pie calories, I regretted the choice of having already had a pint at The Broadfield.

The Waggon & Horses was an altogether different type of establishment. On the edge of a park it was a bright and family friendly pub, more aimed at meals than drinking. The staff were well aware of our challenge and the most enthusiastic, even trying to influence us to rate them higher than the other pubs. Ever the professionals we had to tell them our votes could not be bought in any way no matter how much free stuff they gave us and the bar had already been set very high at The Broadfield.

The range of pies here was more extensive and we opted to try a few different ones. Pierateers SJL & TJP opted to split the Chicken, Leek & Mustard and then start pudding early by splitting an Apple pie. Pierateer RAS chose to stict to the main course with a Venison pie. 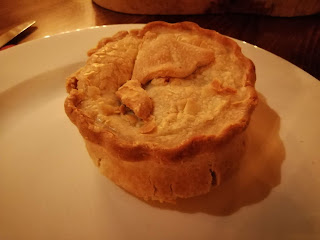 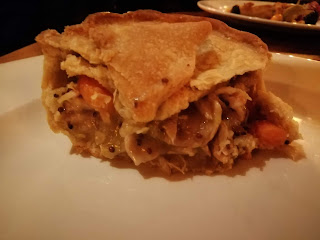 Condition – 6.25/7 – Very similar to the appearance of the Beef pie in The Broadfield. The pies are apparently made on site but they seemed to follow the same blueprint. Fortunately this pie was not covered in gravy but it was slightly cracked.
Color – 6.50/7 – A bit paler than the beef pie but it still looked very appealing.
Cheapness – 5.40/7 – Again, this pie was £9.50 which is perhaps relatively pricy but quality is worth paying for!
Capacity – 6.80/7 – Very similar size and shape to the beef pie.
Chewiness – 5.70/7 – There was a range of types of chicken meat but none of it was chewy. The pastry seemed to be quite different to The Broadfield. This was more buttery and crumbly and perhaps not quite the perfect pastry texture the beef pie pastry had. The pastry might have been dry were it not for the fact it was quite thin. However it did taste very nice, even to eat on its own.
Content – 5.00/7 – The chicken was nice and flavoursome. There filling had a slightly sour taste, perhaps from the mustard which was not unpleasant but perhaps not as creamy as I expected. The flavor of the filling complemented the buttery pastry.
Consistency – 5.20/7 – Whilst very tasty, this pie was a little bit lacking in moisture, Pierateer TJP even poured extra gravy on his which wasn’t necessary with the pie at The Broadfield. 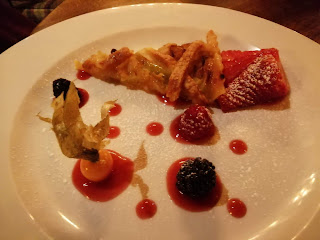 Condition – 4.75/7 – The pie was well presented on the plate with fruit and syrup. However it was a lattice top pie which we are not so keen on at pierate. Ideally we don’t want to see the filling before breaking into the pastry.
Color – 5.90/7 – The color was pretty good. A glisten to the pastry indicated a sweet pastry.
Cheapness – 4.10/7 – At £5 this was pretty standard restaurant dessert price with ice cream or custard but the pie was not very big, probably helpful given we had more to eat but did affect the value.
Capacity – 2.75/7 – The slice of pie was both not very tall and also quite small, neither made us optimism that it would have much in the way of content.
Chewiness – 4.00/7 – A bit too soft, there wasn’t really anything to get your teeth into with this pie. This applied to both the pastry and the few chunks of apple that we found. The apple filling was more like jam. Not the perfect apple which has a bit of bite.
Content – 4.90/7 – The filling was sweet and syrupy which was actually quite tasty. It might have got sickly if there was more of it.
Consistency – 4.25/7 – although tasty enough, the soft texture of this pie let the consistency down. Not one we would order again.

After polishing off the pie in the Wagon & Horses we had to dash over to The York. This was a bit further away so we took an Uber. He must have known we were in a rush because he didn’t even stop at a pedestrian crossing when the light was red and a pedestrian was crossing. This was perhaps taking things a bit far, pies are very important to us but we might draw the line at killing bystanders.

Anyway, we made it to The York without significant injury and went inside. A bit more like The Broadfield, this was a dimly lit drinking hole although there were plenty of tables for eating. They didn’t quite understand the challenge we were doing but nevertheless they diligently answered questions about the pies.

We opted to all try the Steak, Ale & Root Veg pie, thinking it would be quite similar to the excellent pie in The Broadfield but we were wrong, here is how it rated; 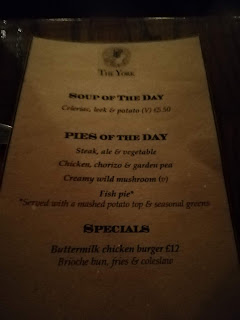 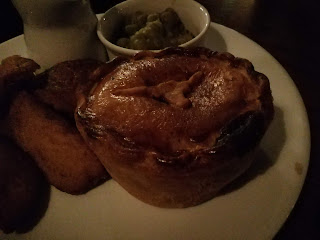 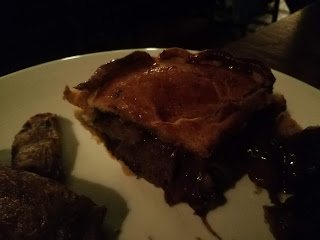 Condition – 6.25/7 – On the face of it, this pie looked pretty similar to the others.
Color – 6.25/7 – Again a nice glossy brown although this one was perhaps a bit overdone at the edges.
Cheapness – 5.10/7 – For some reason The York charged an extra 50p for thier pies at £10 a pop, with a small amount of potato wedges and peas the value could have been better.
Capacity – 6.80/7 – Again the capacity was very strong.
Chewiness – 2.50/7 – Whilst not as tender as the meat in The Broadfield pie, it wasn’t too chewy. The veg was nicely done. However something had gone very wrong with the pastry for this pie, to be brutally honest it was awful. It was soft but also somehow oddly chewy. It tasted like it had been microwaved. We didn’t know for sure if this was the case but the waitress did say they cook them in batches and heat them up. She then said they use hot water crust pastry which can go wrong if not heated properly.
Content – 3.50/7 – The steak had a nice flavor although there was less of it given that some space was given over to veg. The pie was sweeter tasting which was perhaps from the root veg which seemed to be predominantly carrot and parsnip. However the taste was tainted by the pastry which not only had an odd texture but also an odd flavour. TJP was brutaly honest when he said that it was a bit flavorless and the flavor it did have wasn’t enjoyable.
Consistency – 3.50 – What could have been a consistently good pie was ruined by the pastry, a shame to end the challenge on a low note but given the good filling we can at least say this pie had potential!

So we have a clear winner in the True North Sheefield pie challenge. As recommended to us, the pies at The Broadfield were truly outstanding gaining Pierate Highly Recommended status. The meat pies at the Wagon & Horses were also highly regarded with a score which achieves a Pierate Recommended award. Many thanks to all at True North, especially Tom in the media team for arranging it, we had a great time and a fun weekend seeing the sights of Sheffield despite the awful weather! 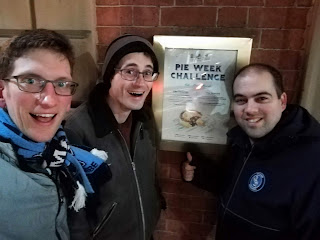 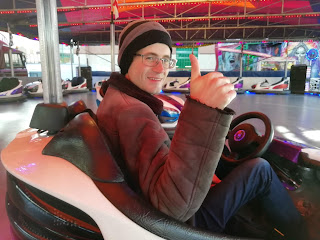 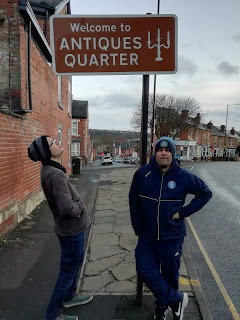