The day of the British Pie Awards has arrived! Held in the heart of pork pie country – Melton Mowbray – the scene is once again set for around 100 judges to rate well over 900 pies from across Britain and beyond! Of course you won’t be surprised to know we’ve been invited again this year – having been a judge, media or helper at the British Pie Awards since 2013 – and this year Pierateer Rob will be there as judge and media to give you the inside scoop of what takes place – Live! Plus check out this exciting news about the Pie Awards being filmed this year:

The 11th annual British Pie Awards heads home to St Mary’s Church in the heart of Melton Mowbray once again. And as well as looking forward to seeing lots of our pie friends at the Awards, we’re looking forward to sharing our ex-pie-tese with fellow judges and providing the inside scoop with some media coverage too.


As you may know the British Pie Awards use a significantly different set of criteria to us (rather than the 7 Cs of pie rating that we have used to rate over 625 pies on Pierate) but there are very few pie experts with more ex-pie -rience than us when it comes to the pie-fect pie!

So check back here during the day for live blog posts below and on Twitter and we hope you enjoy hearing about the British Pie Awards 2019!

9:30 It seems amazing to think that a whole year has passed by since the last British Pie Awards but here we are again, traveling up to the greatest show in pies! It’s just Pierateer Rob attending this time round and he is on his way on the train from Birmingham now.

10:00 Just been familiarizing myself with the Judges briefing pack ready for later! Wonder what category I will have this time – having done “Other meats” on my last judging visit!

10:50 So confirmation that I am on Class 13 – Chicken and other meat! I’m in the same class as fellow pie blogger Katie Peel, our newest Honorary Pierateer!

11:10 Apron collected and now it’s time for the judges briefing to commence, to welcome everyone and fill everyone in on what is happening today.

11:25 We have just had our briefing and are now going to file into the main hall ready for the control pie, which shows how the head judge would score a pie.

11:30 Matthew, the chairman of the Melton Mowbray pork pie association, is thanking all the judges and the sponsors of the pie awards.

11:35 Reverend Kevin from St Mary’s church has just blessed the pies, as is traditional for the awards. That means it’s almost time to rate!!

11:40 The head judge Colin Woodhead is going through the control pies – one cold pork pie and one hot beef pie – to say why he would give the scores he has.

11:50 Let the judging commence!!! I’m judging with Sue Woodall, from ladies in pigs, who has judged 7 or 8 times now. First up in the chicken and other meats category is a chicken and ham hock pie! The first of many, I predict…

12:15 The judging is in full flow. Mainly chicken and ham but a few with haggis or chorizo ​​to mix things up!

12:45 I have been doing the rounds to find out how others are finding it and there are certainly some intriguing flavors – especially in the speciality meats and game pies class. Lots of venison (including one with dark chocolate) plus a duck and blueberry pie and rabbit pie.

13:00 Once again the top table (class 1) is the Melton Mowbray pork pies – all judged in pairs. Looking fantastic!

13:10 A few pies have had to be disqualified due to being over weight and a pasty definitely snuck into the beef pie class but overall people seem to be enjoying themselves!

13:25 Just been speaking to TV’s Andy Clarke who is looking very patriotic (pastryotic?!) in a union jack shirt. He has enjoyed a number of venison pies in the specialty meat and game class.

13:35 A mix bag in the free from class, with a lot of steak and ale pies in there. Some pastry holding together better than others!

13:40 Our last pie wasn’t a cracker but overall the standard was pretty high. Some definite gold medal winners and will be interested to see who made our chicken and other meats class winner!

13:50 Still judging going on in some of the larger classes but we’re all done for the day, with our top 3 selected. Fellow pie blogger Katie Peel had a chicken and haggis pie but lots of chicken and ham too.

14:00 Filming is complete for the day. Looking forward to seeing the documentary later this summer about the awards! Check out the British Pie Awards Twitter feed on Friday to find out who wins it all!! 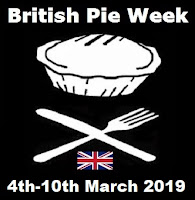 Did you know? This is the fourth time that the British Pie Awards are happening in British Pie Week, following a successful but controversial first time out in 2016 when a pasty was crowned supreme champion and a more regular win for Dickinson and Morris Pork Pie in 2017 and Turner’s Pies Steak and Ale Pie in 2018.