British Pie Week is a special time of year and the Pierate virtual pie night seemed a perfect excuse to go for something a bit fancy. One of the best known producers of fancy pies is Calum Franklin who we previously talked to about the beautiful pastry creations he makes for the Holborn Dining Room where he has created a specific ‘Pie Room’. Calum has now released a recipe and guide book called ‘The Pie Room’ and given the time we are spending at home in the lockdown it seemed the perfect thing to try out for British Pie Week. Unfortunately on the Pierate Ship we are more known for eating pies and some of our creations have been far from beautiful so I was a bit concerned about how this would go. I also had to alternate from the recipe in that I made Gluten Free pastry so that Pierateer ALE could also enjoy the pie. We are moving house and had a glut of onions to use so I chose the Cheesy Dauphinoise & Caramelised Onion Pie. It also contained a lot of milk and cream which sounded great to me, being from a dairy farm I do love my milk. This was the first time I had ever made a free standing pie, I was worried that it might completely fall apart but despite using notoriously crumbly gluten free pastry it only cracked slightly. The pie took absolutely ages to make so I didn’t feel motivated to do more than a simple pastry homage to British Pie Week but it was still one of the best looking pies I have ever made (the competition isn’t strong though). I slightly got the advice on egg glaze wrong which was a bit disappointing because I was keen to get a pie as deep brown as the ones Calum makes, but it was still a pleasing colour. The pie sliced ​​like a dream which was one of the joys of making this free standing pie, it really still looked like pie when served up on your plate. I made the recipe with half the listed ingredients and Pierateer ALE and I had a quarter each.

But how did it taste? I always find it strange to review a pie I have made but if I give the credit to Calum I think I can say that this was delicious. I can’t actually remember having a meat-free pie as tasty as this. It would definitely be worthy of a Pierate Highly Recommended award. There wasn’t anything too fancy or difficult to source in the recipe except quite a lot of fresh rosemary and thyme. This, along with the onion and some garlic added a delicious taste to the creamy and cheesy filling. The filling was built in layers which adds to the appearance. Unfortunately with my smaller version I think it was too shallow to fully reveal the layers but it still looked good. It was quite remarkable how moist this pie was despite being free standing. The potato was soft but retained some bite giving it a satisfying consistency. A pie really befitting of British Pie Week and I would certainly recommend it if the meat free content sounds appealing to you. 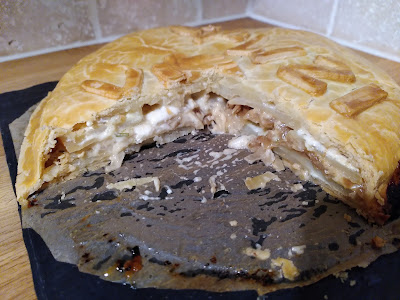 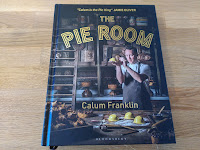 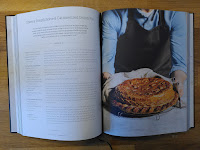 PS A few words on the making of this pie, I really tried to follow the recipe to the letter which took me ages. Although the ingredients were simple the potato and onion were separately cooked on the hob, then also in the oven before being wrapped in pastry. The final pie then took 45 minutes in the oven. There was also a lot of times where you had to put things in the fridge to chill, it felt complicated to someone not used to these things. I think the pie would fall apart without following all the steps so overall allow plenty of time. I made the filling the day before which worked well. The main thing that I found really amazing was that the filling all held together when I turned it out of a dish on top of the pastry. Then through some miracle my gluten free pastry stayed in one piece as I turned this onto the filling. If making this kind of pie appeals to you, I would recommend the book which is well written and includes plenty of general guides, tips and tricks as well as the actual recipes.