Like a non-league team beating Premier League opposition you sometimes get those that defy the odds. How could part time players beat full time players, some of the best in the world, when at such a disadvantage? The shock winner of the Supreme Champion award at this year’s British Pie Awards seems to be a case of a pie punching above its weight in a similar manner. The Mooless Moo winning by from Pieminister not only excluded all animal products because it was Vegan, it was also Gluten Free. Myself and Pierateer ALL have had some pretty awful Vegan Gluten Free pies as pie companies try to cater for all those with special dietary requirements in one hit. By doing away with all the usual ingredients of pastry they are surely competing with one arm held behind their backs when other pies have all the ingredients of the world to choose from. So how did this pie win against all those pies packed with meat and gluten? Pieminister kindly sent us some to try and see if the free from pie has finally come of age. Or have the British Pie Awards cooked up what might appear to be yet another serving of publicity stunt (having previously crowd a pasty as 2016 and vegan pie as 2019 Supreme Champions).

The pie had an excellent condition and appearance although it has cracked somewhat in transit, but had been delivered by post so it would have been challenging to avoid this. It was well glazed, with an unusual sticky substance very visible on the pie before cooking. This alternative vegan glaze worked a treat, producing a near perfect golden brown colour.

Cutting the pie in half, it was packed to Capacity giving a lot of Content as we have come to expect from Pieminister pies. But it was immediately apparent that the pastry was quite hard, compared to the regular GF moo it shattered rather than crumbled. It was hard to the bite too, with a somewhat biscuity taste. It was by no means bad but having tried a lot of GF pastry Pierateer ALL was certain it wasn’t as good as the regular Moo. I felt like it would be difficult to disagree with this when trying them alongside each other.

So, after briefly questioning the pie we delved into the filling. There was a lot going on here with a huge list of ingredients. But it was immediately apparent to me that this was a standout pie filling. It was somehow amazingly meaty in flavor, capturing the flavor of some sort of slow cooked steak casserole. Jackfruit helped given the slightly meaty texture but I am not sure how they captured the flavour, perhaps the use of gluten free ale helped. There was also the taste of carrot, mushroom, whole baby onions and plenty of herbs. Given the strong flavors it is perhaps not for everyone, ALL was not as keen as I was, much preferring the regular Moo. We did note that the consistency was much the same between the two, both being quite soft and melt in the mouth. Perhaps a bit more bite to the filling could have been nice but at least it wasn’t Chewy.

Overall, we certainly aren’t going to make it our Supreme Champion, but it comes in as a Pie-rate Recommend pie, and one of the better Gluten Free pies (but below the excellent Gluten Free Moo). It is without doubt the best Gluten Free and Vegan pie in our rankings and perhaps does suggest that such pies have finally come of age with this being a strong effort that we would have again. It wasn’t many years ago that finding any commercially available Gluten Free & Vegan pie that Pierate could recommend seemed completely unfeasible. It is noticeable that Pieminister continue to lead the way in terms of sustainability amongst the big pie producers, having done away with pointless plastic windows in their boxes and not a trace of polystyrene in their pie deliveries. This sits in their growing roster of top notch Vegan pies. 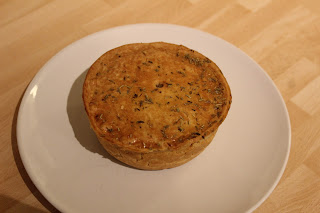 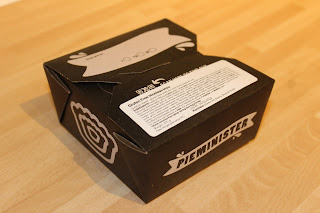