There are some celestial events that occur infrequently and are worth celebrating. For instance, eclipses or close passes from comets gain widespread media attention. So it is this year as British Pie Week and Pancake Day align, a relatively rare event which will not happen again until 2025.

Whilst British Pie Week always occurs the first full week in March, the date for Pancake Day (or Shrove Tuesday to give it’s proper title) is not as fixed. It is governed by the start of the period of Lent which is 46 days before Easter. Easter is always the first Sunday after the first full moon that falls on or after March 21. Therefore the alignment of British Pie Week and Pancake Day happens only about once every 3-8 years. This is something we decided should be celebrated on the Pierate Ship so we have done something we wouldn’t normally do; to twist the rules surrounding what makes a pie a pie. For those that don’t remember, our definition states;

1. A pie is deemed to be a filling totally encased in pastry.
2. A pie must have sides, a base and a discernible lid made from a separate piece of pastry.

But we have never defined exactly what pastry is. So for this experiment I postulated that if pastry dough were to be replaced by a suitable pancake batter and thus used to fully encase a filling, it could be argued that it is in fact a pie which would perhaps be called a Pancake Pie. Aren’t batter and pastry pretty much the same thing anyway? A bit of flour, a bit of fat and a bit of liquid? Given the higher liquid and protein content, perhaps batter is like a diet version of pastry, perhaps we could be onto a new pie based diet like a our attempts during British Pie Week 2014.

On with the making, firstly we had to start by cooking up some pancakes;

I mixed 100g Gluten Free plain flour, 1 egg and 0.25 litres of milk. I made thin pancakes which I fried in plenty of butter.

The first pancake was simply placed in a pie dish…. 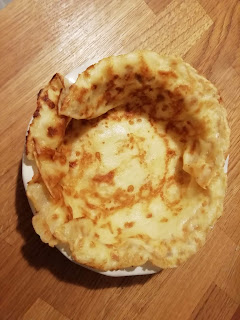 Onto the filling. Whilst this would probably work equally well with a savoury filling, I had already eaten dinner so I opted for a sweet filling of sliced ​​Banana and some Hazelnut and Cocoa spread. I have to give a special shout out for this Meridian spread, it is expensive but it is palm oil free and 75% Hazelnut which means it is pretty nutritious but I think it tastes just as good as Nuttela (which by contrast is mostly sugar and palm oil with only 13% Hazelnut). 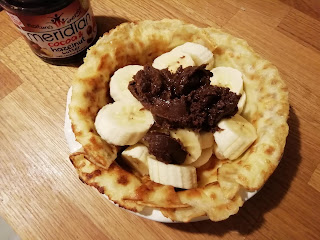 Next I brushed the pancake base with a bit of raw batter. Unlike pastry, pancakes aren’t going to stick together so this was an attempt to make the lid hold in place. 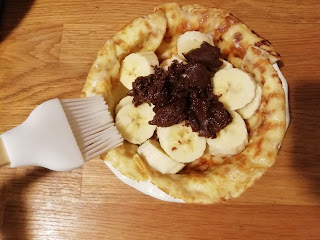 The next pancake was freshly fried and placed on top of the pie, it formed a surprisingly good lid. 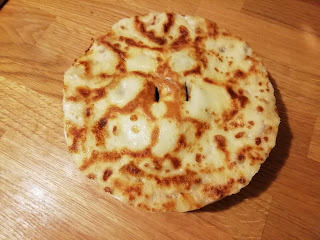 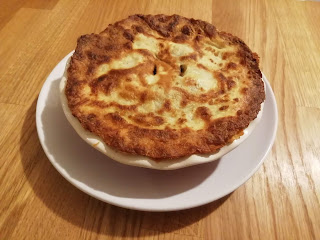 And it actually sliced ​​up pretty well! It held together better than many genuine pies that I have eaten. 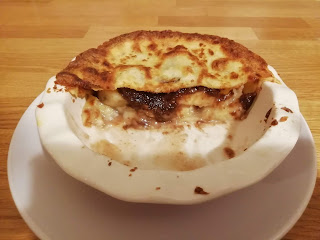 Despite not being a true pie, the Pancake Pie tasted great. It had a really interesting mottled brown Color and the lid and sides held together well so it was in good Condition. The pancake lid had a nice crispy texture, as you might want from good pastry, whilst the base and sides had a more gooey texture having mingled with the banana. As for the filling, the Hazelnut spread had melted into the warm banana very nicely. It tasted great and made me wonder why there aren’t more Banana, Hazelnut and Chocolate pies out there. The benefit of having made a Pancake Pie rather than just eating this as pancakes is that it meant the filling had really heated up and the filling and pancake had mingled together rather than simply just being on the same plate. The crispy pancake was also really nice which was an unexpected surprise.

So there you have it, we have tried a few experiments on the Pierate Ship but unlike the Pie-thon (Python Pie), the Piezza or the Popcorn Pie, this is one of the rare occasions where it actually worked! Do try this at home, I think I will try it again in 2025.