The countdown to British Pie Week has begun!

British Pie Week 2020 – which runs from Monday 2nd March to Sunday 8th March – is now just two weeks away and we’re busy at Pierate HQ making our final pre-pie-rations for the big event! We’re planning another Birmingham Pie Night (like the Pie Night we had in 2018) and we will be keeping our eyes on the pies as the British Pie Awards are once again happening in British Pie Week too!

For those who aren’t in the know, in Britain we need a whole week to celebrate and enjoy the wonder of pie, which is why we are proud backers and – some would argue – have been the strongest advocates of British Pie Week! Yes, put simply it is a whole week to enjoy the beauty of the pie!

Some of you may well have come across British Pie Week before, which has in fact been around since 2007 as the ingenious marketing spin off of pastry company “Jus-Rol” – and they managed to bag the lucrative web domain www.britishpieweek.co .uk to encourage pie makers up and down the land to get involved. However in an obscure turn of events, it appears they have ditched this lucrative web domain again this year to re-direct straight to the generic Jus-Rol website and no real mention of pies or pie week! With the @BritPieWeek twitter account having not tweeted since March 2016 it appears Jus-Rol may have had their pie and eaten it, meaning we may be defaulted to be the premier resource for pie advice this British Pie Week!!!

And while others may have used British Pie Week to just promote some pastry, as good as it is, we at Pierate are dedicated to promoting THE PIE!

We aim to be the pie experts you turn to for all your pie rating and eating needs during British Pie Week and beyond! With over 650 pies rated and reviewed on our unique 7 Cs pie rating system, we commend pies to you, tell you which ones to avoid, and give you the low down on what we think makes the perfect pie! 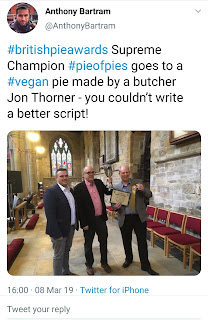 Also on 4th March pie companies from up and down the land will be having their pies rated at the British Pie Awards, where we have helped judge the pies for many years, with the results due out on Friday 6th March. After many years of service there we won’t be attending this year, but we will keep an eye on the results. While last year was controversially won by a vegan pie, with the maker of the BBC documentary being filmed about the awards just happening to tweet “you couldn’t write a better script!”, we wonder if it will be back to a normal pie contest this time around or once again be the PR awards. All eyes will be on Melton Mowbray on Friday 6th to find out!

So whatever pie (or pies!) you enjoy in British Pie Week, we hope it’s a good one that rates well on the 7 Cs of pie rating! If you need any ins-pie-ration, you can of course see the hundreds of pies we’ve rated on our pie blog via our Pie Rankings or our Pies Categorised!

Why not watch our short video clip to find out how you can get involved in British Pie Week too and make a #PiePledge!