Making its way to a McDonald’s restaurant near you, from Wednesday 14th July is the new McSpice Chicken Sandwich.

Are you hyped? I’m pretty hyped.

This is the first time the McSpicy has been available in the UK, however, it has been on overseas menus for many years now.

The smartest fast food fanatics (yes you!) will have known about this promo item since our tweet on 3rd June – what’s that? Approximately 5 weeks before the official news came out!?

You only have to do a quick Google search to see that the McSpicy was first sold in Singapore WAY back in 1999, and has since been on-sale in other markets such as Australia, Hong Kong, India, the Philippines and Indonesia.

Inevitably, our Press are already hyping it up calling it the “hottest burger yet” – they’ve probably forgotten the Hot (and Extra Hot) & Spicy Buffalo BBQ Chicken although that heat came more from the sauce than the actual burger/patty.

Odds on the same Press knocking it back down again a few days after launch by gleaming social media for only the negative reactions to suit their narrative? 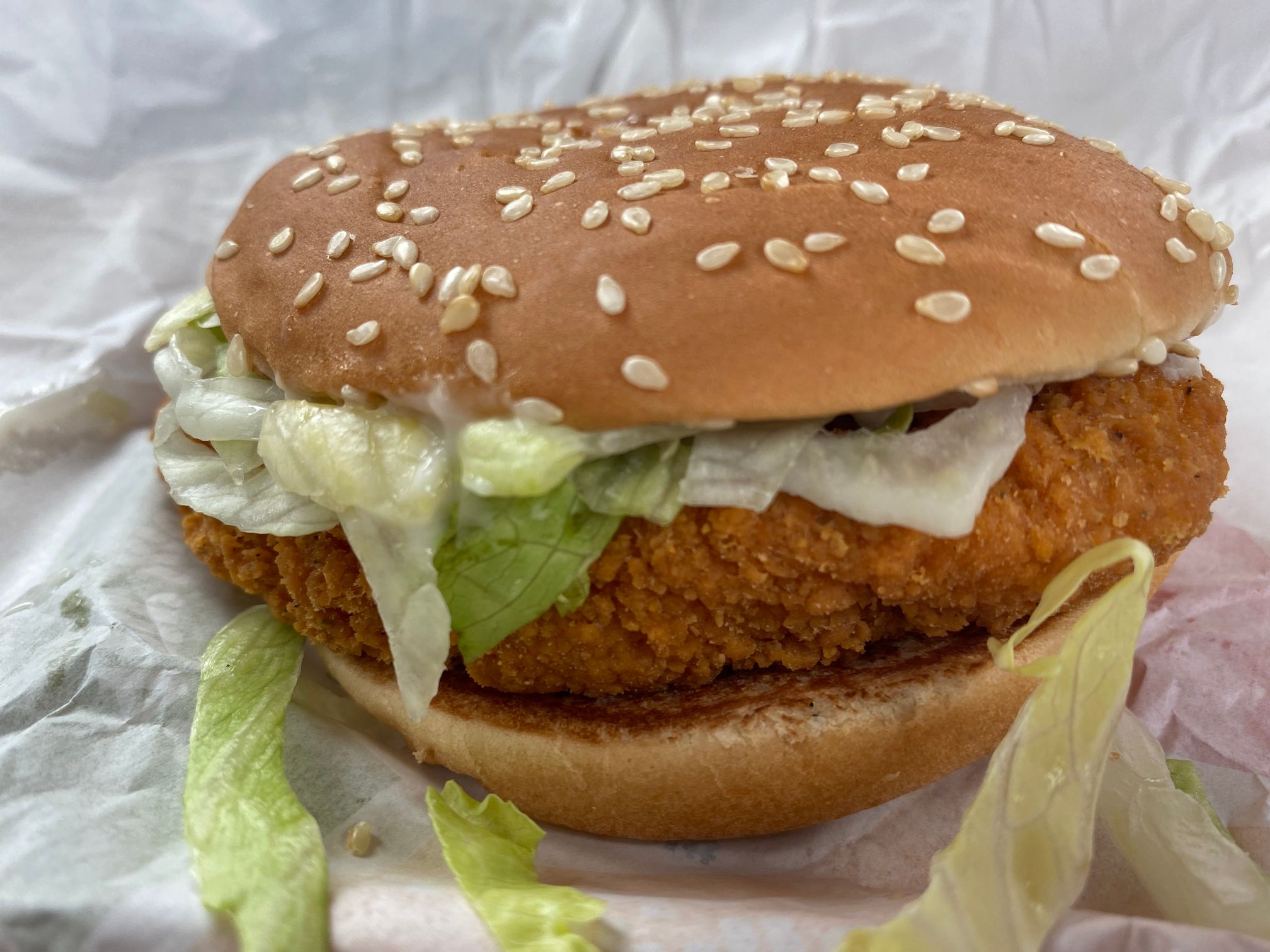 There will be the inevitable crowd of McDonald’s fans knocking the McSpicy for “not being spicy enough” – possibly the same people also complaining that The Golden Arches never try anything new in the UK.

This is now the second new chicken patty/burger in this country in 2021 following on from the Homestyle Crispy Chicken – it’s gotta be better than two Chicken Selects in a bun surely?

On paper, this is basically a McChicken Sandwich but with the McSpicy patty/burger instead of the McChicken… but is it actually any good…or spicy!?

I am going to ignore the pleading of Rob who left an amusing and bizarre message via the website to “Please don’t give this a good review, it’s an utter rip off” – we will talk more about this in our next episode of the podcast

IMO, the McSpicy is a really good chicken burger and I was quite shocked by the spice/heat levels.

You cannot please everyone and what one person finds spicy, another person will find mild. But for a high street, fast food chicken sandwich/burger, you cannot deny that there is a surprising spiciness to this. 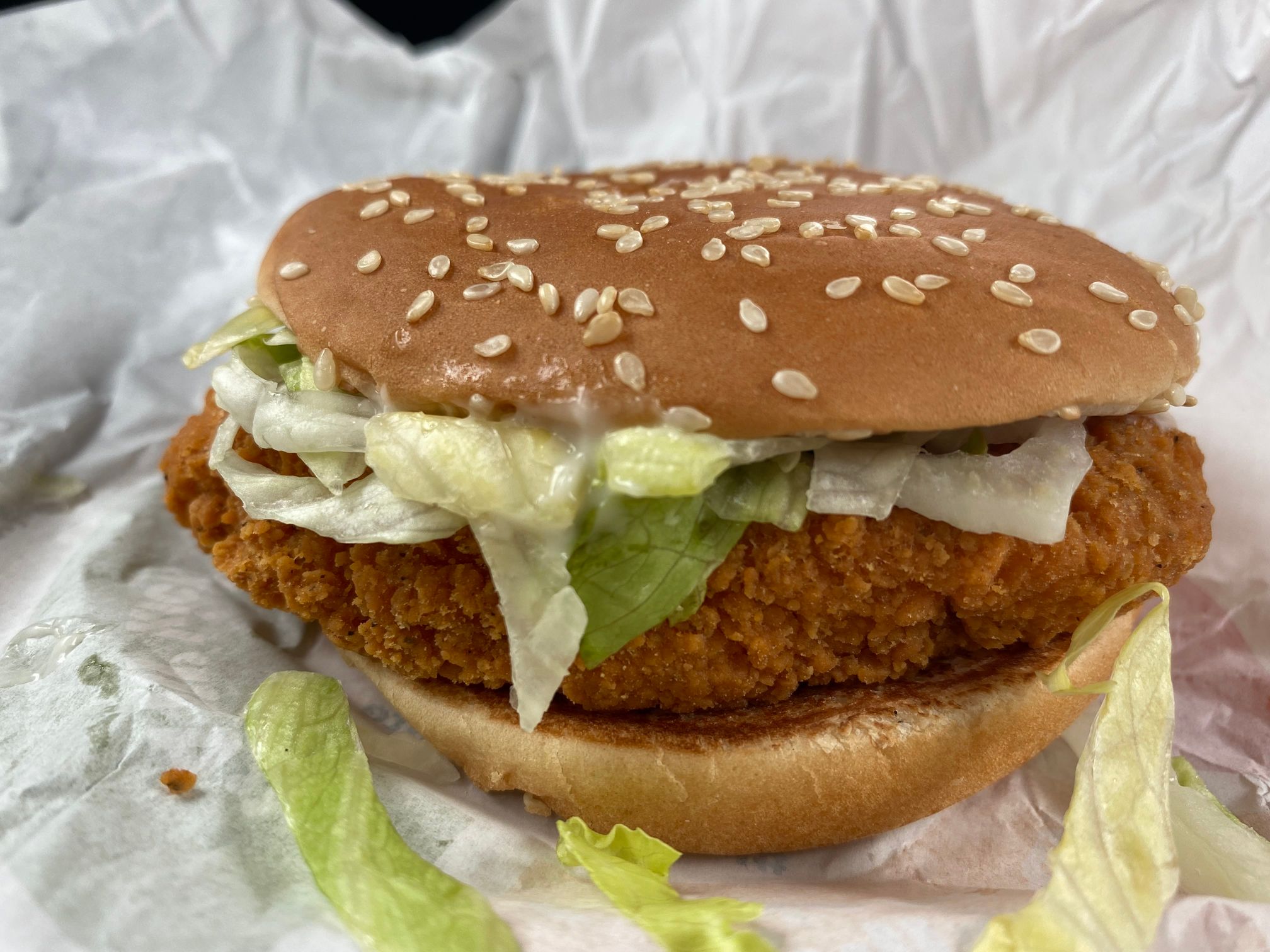 On the first day of release, McDonald’s were giving away a free milk which I appreciate is a bit of a gimmick. And checking the app, there are no customization options other than removing ingredients and no, you cannot make this a double whoever asked me that question.

The McSpice is spicy. I’m a Naga/Madras/Jalfrezi guy and honestly, I was slightly taken aback by the heat and I really did enjoy it.

The coating of the chicken is worth a mention – and no, it’s not “basically a Mayo Chicken with a spicy sauce”, Rob.

This is a McChicken Sandwich (sort of) but with an upgraded crispy coating which certainly feels thicker and crunchier… it’s satisfying and gives the KFC Zinger a run for its money. It’s nothing like the chicken burger on the Mayo Chicken.

The lettuce and Sandwich Sauce (yes there is a difference between this and Cool Mayo) are a safe option and enables McDonald’s to release a new burger but with no additional ingredients required.

The downside to the McSpicy is that it does feel like a budget burger (I agree with you there Rob!). In fact, when our bag was delivered to our car, at first I thought I was missing the McSpicy as it doesn’t come in a traditional card clamshell. Instead, wrapped in what you would expect on the Saver Menu. 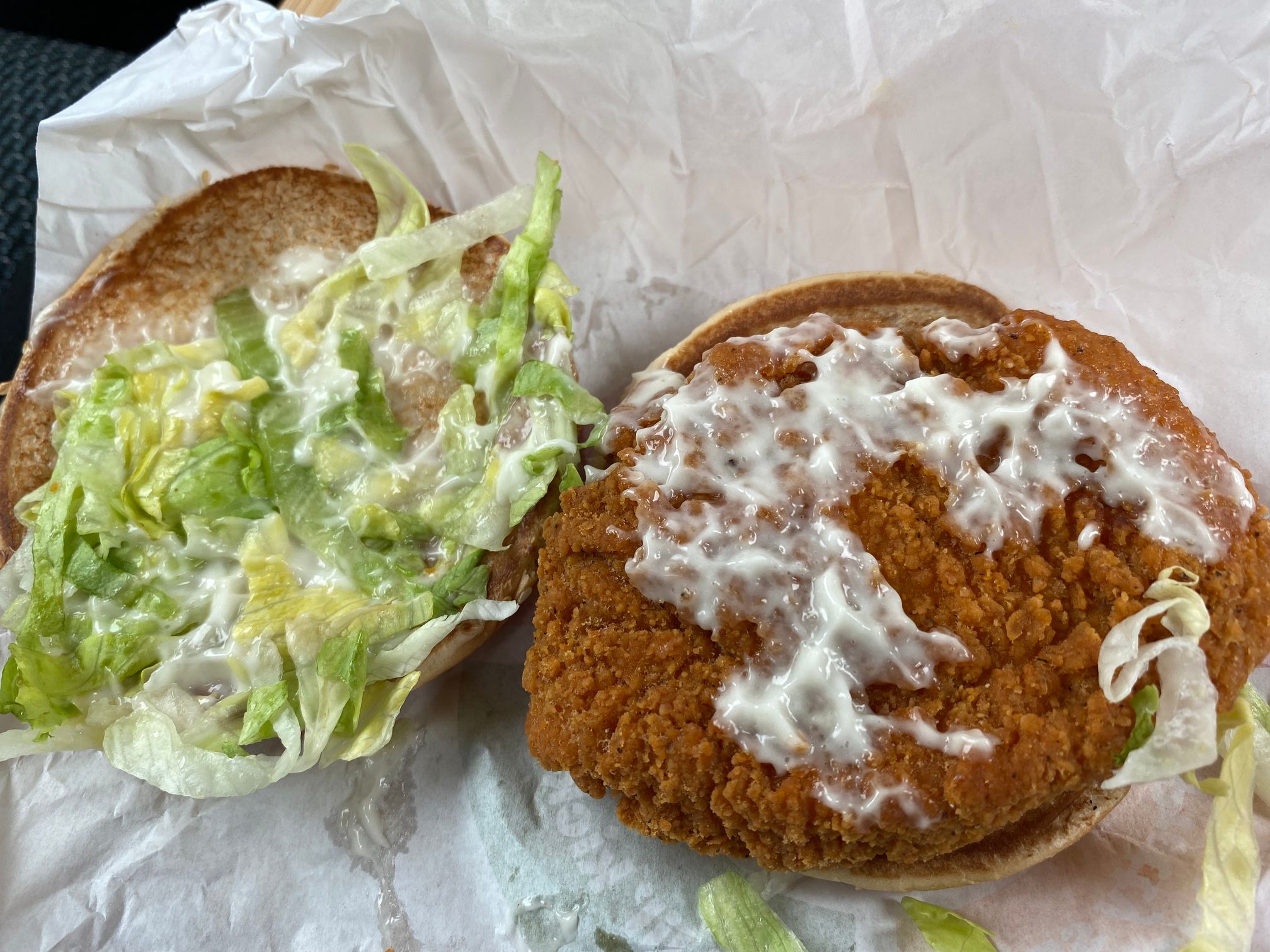 The burger alone is close to four quid depending on where you are… and this does feel more like something that should be in the £2.50 region.

Personally, I’m not fussed by the price but I can see that some people could be offended by the cost of the McSpicy. I wasn’t…

There will be an obvious comparison to the KFC Zinger and to an extent, the heat levels offered by the Spicy Chicken McNuggets (God I miss that dipping sauce they came with!).

If you want scorching heat – go and find some establishment that makes you sign a disclaimer before you eat it – the Cry for Help Wings at Solita can be your first destination/mission! 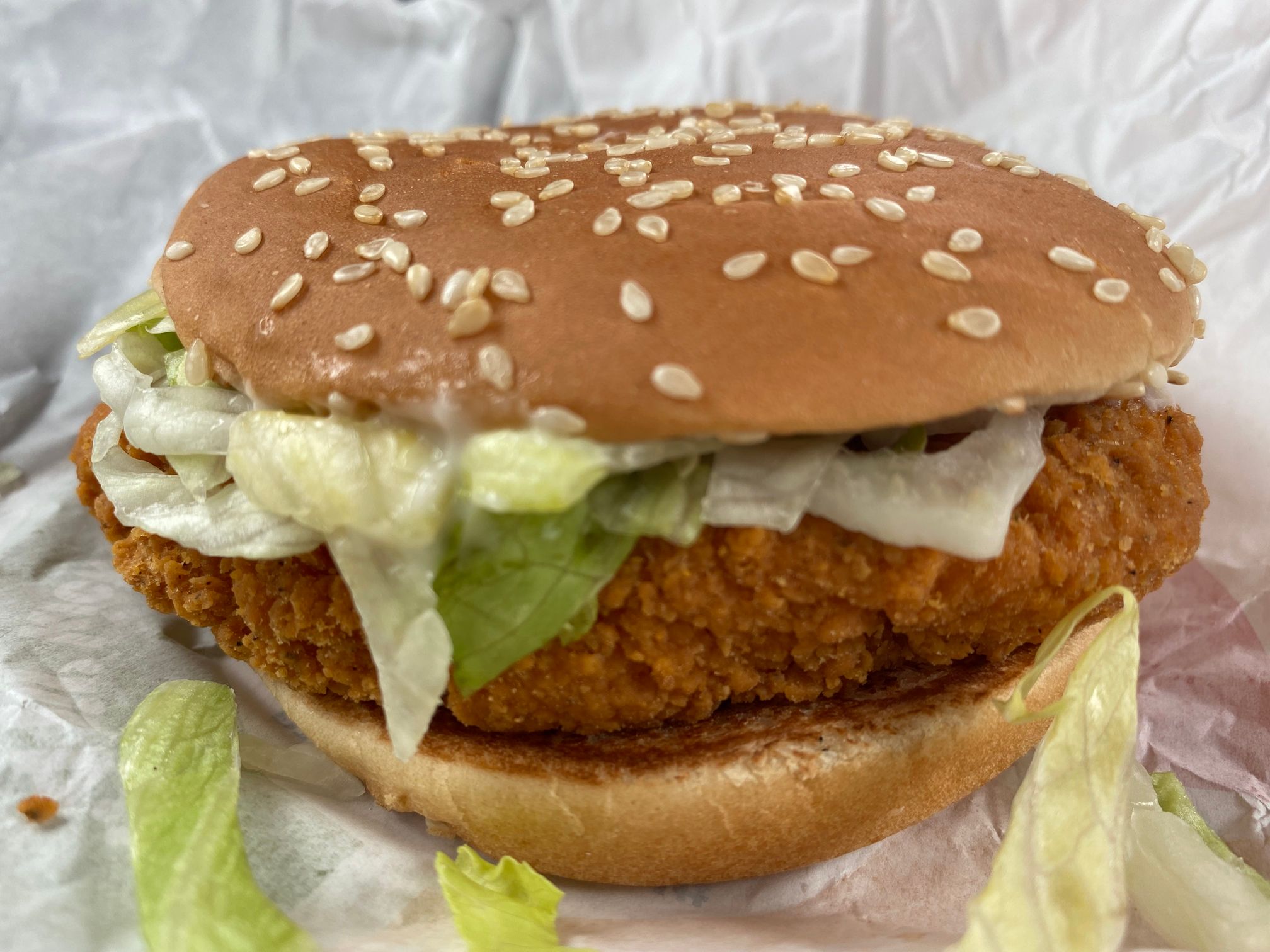 I believe that the introduction of the McSpicy to the UK market is a positive and could lead to future promotions such as The Spicy Challenge and/or other overseas menu offerings – similar to the postponed/cancelled(?) Worldwide Favorites LTO.

If you need a reminder, The Spicy Challenge was at McDonald’s Singapore in 2014 and offered four levels of spiciness; Sizzling Citrus, McSpicy, Flaming Green Curry and the Fiery Mala Burger.

It’s actually similar to “Meet the Zingers” which KFC introduced in this country in 2016.

Something similar to The Spicy Challenge could work in the UK if you offered each burger/sandwich for two weeks over an eight-week period, and has the potential to appease those cohorts saying that anything McDonald’s offers with “spicy” in the name is never spicy enough. And it never will be…

As you will have already heard via the podcast or seen via our usual channels, up next is the BBQ Quarter Pounder (also available as a Double) which is scheduled for Wednesday 28th July for “4 weeks only – so you’ll have to be quick”!

Our review of that will be slightly delayed due to holiday – OMG I MIGHT MISS IT!!!

After the new BBQ QP, we are informed by Secret Sauce (PS we love you Secret Sauce!!) that Monopoly will return on Wednesday 25th August alongside the Big Tasty. 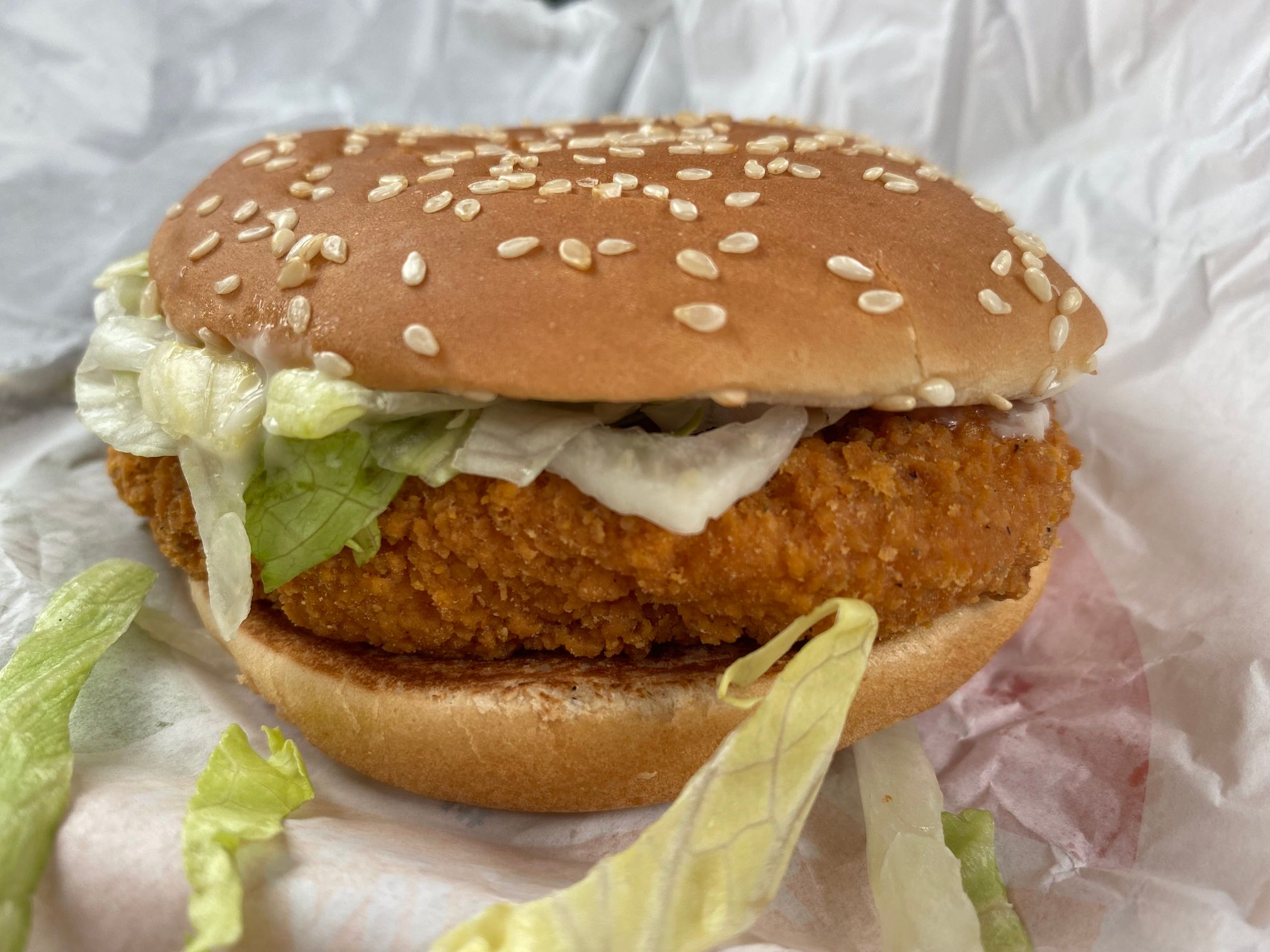 Thinking back to the McSpicy – ​​I was genuinely surprised how spicy the crunchy chicken fillet was and it is (IMO) a more than adequate limited time offer at McDonald’s. I hope it returns in the future in various guises (again see The Spicy Challenge).

Yes it is overpriced for what it is but it is certainly refreshing to see another new chicken patty/burger in the UK especially with an import of an item normally reserved for overseas menus.

That’s what you wanted isn’t it!?

You can never please everybody and some will say it is mild… others will say it’s fiery… I guess that is exactly what the Marketing Department wanted with their #McSpicyDebate tagline.

The McSpicy will be available until Tuesday 24th August – I anticipate sampling one more before that time. 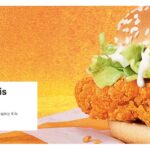